In the last decade I have been exploring dance created specifically for film as a medium for choreography.  My first 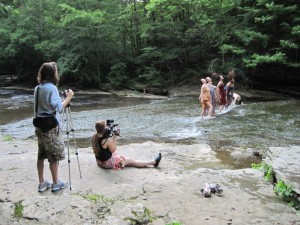 dance film, “Confluence,” premiered at Women’s Works 2010 at Nashville’s Looby Theater.  This was an exciting project with Blue Moves, working in water at Rutledge Falls. “Confluence” was  featured with live dance accompaniment in Blue Moves’ “Deep Blue” August 2011 at the Darkhorse Theater and the Nashville Fringe Festival in September of 2011, and was screened at Chattanooga’s dance film festival as part of their semi-annual city-wide event, MAINx24.

“Refracting”, an underwater dance film, was a collaboration with co-director and editor Ashlyn Cianciolo and Blue Moves.

Shorter projects include “Maybe I Had To”, which explored dancing in a tree, a couple of process-oriented personal works during the pandemic, and the “Connecting” with Blue Moves — a response to being isolated during the pandemic.